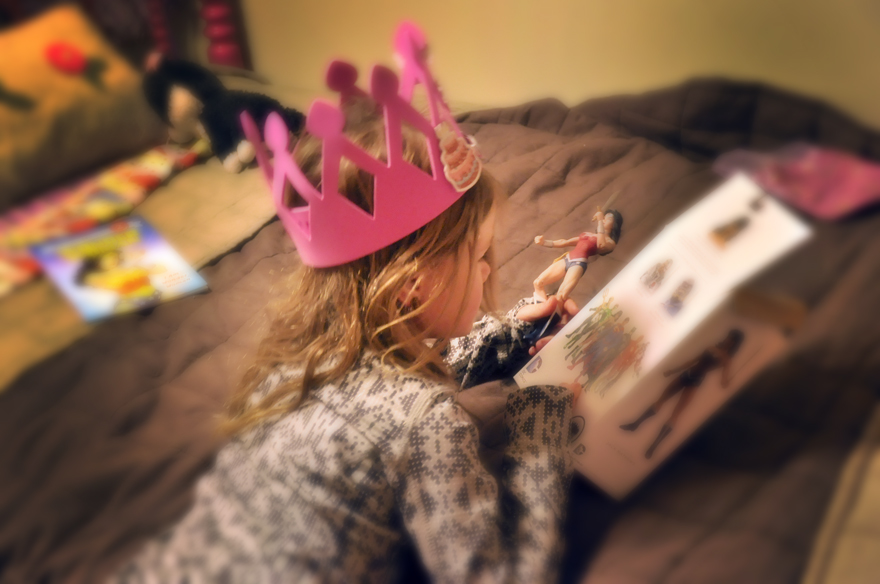 She’s new around these parts, but she has received a very warm welcome from everyone. Move over Barbie, girlfriend has a lasso. 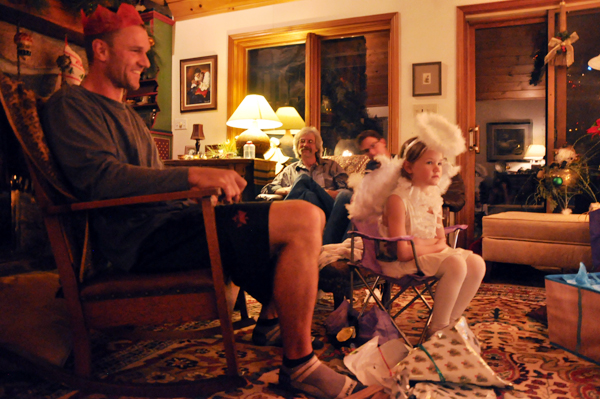 Ava aglow in her Lenore getup.

Full transparency: The kids are off at lessons of one sort or another under the exhaustive care of their dear father and there exists, right now, an opportunity to remedy one or many of the exactly three thousand eight hundred and twenty four things around the house that are demanding immediate attention (including a screaming pile of unfolded laundry, dishes of leftover food that are hastily unleashing a plague of filth over kitchen counters and sinks, and a dozen red-flagged house-crippling maintenance issues).


However, in the face of the end of my creative function altogether, I have made a conscious decision to sit down. With a coffee. And write.

So, I figure I’m going to house-cleaning and responsible-parent hell at the expense of a moderate amount of satisfaction for the soul. So be it. It’s happening.

My husband of old was the first to poo poo the arts. Science! Engineering! Fact! Blah blah blah. I will never forget the stunned look on my father-in-law’s face, when, as a 19-year-old girl, I told him I was going to the University of Waterloo. For an arts program. And the apple did not fall far from the tree.

But here, inspired by two little girls with room-sized imaginations, things are changing.

[Puffs up cheeks, exhales forcefully to blow dust from blog]

And somehow, the absence of any meaningful posts on the blog actually do justice to the life that’s been unfolding in this bungalow. In the last year, the girls have grown into small humans (as I like to call them) as opposed to toddlers or even kids, and Brett and I have settled (even) more comfortably into parenthood.

Ava is a sensitive girl who can canter a pony or write a letter asking Santa for lipstick, who has a best friend, and who has just discovered Wonder Woman (is it the end of Barbie at long last?!).

We are clinging to the very end of our baby Edie, whose limbs now dangle off the bed and fill the bath tub and exhibit surprising strength during play tug-of-war. Edie is a sweet girl who makes friends wherever she goes, gives hugs freely and always wants to go down the big slide/zipline/jump.

Brett and I have quietly (though diligently) built equilibrium. The kids are challenged, the paycheques are earned, life is good and all under our roof are happy. Ambitious, and always forward-looking, but happy.

Of course, introspection is an early and easy victim of life these days. When the day is consumed with an array of deadlines and due dates (no matter their lack of real gravity), day’s end is *spectacularly* dense and unproductive. After we tuck the kids in, the act of unwinding has comprised a thoughtless Hollywood feature film or even worse, Buzzfeed.

[Concerned to find self slowly circling around a resolution for 2014…]

The next year may not involve much, uh, self-actualization and stuff. And it will still, likely, include Will Ferrell movies (I find the man is funny, what can I say?).

But hopefully, for each day that begins with early breakfast together (and is followed by school, work, music lessons, crockpot dinners, bath time, some sibling rivalry, teeth-brushing, jammy-choosing and three-dozen stories), more will end with a blog posted, a frock sewn, or a drawing sketched.

And if not, there’s likely an animated cat gif on the internet somewhere that needs an audience. (Selflessness will be my second resolution.)

After all those summer nights, years ago, chasing the brooding boy with the guitar; after all those late shifts at work, slinging trays, sloshing drinks, planning to get to the next show over a polish of cutlery at 2 am; after all these years getting older and growing up, I finally found myself in front of him.

You know me. I was never one of those girls. I don’t swoon. I don’t fall over for boys – even if they happen to be on stage.

But when I saw him, with the dark curls and unassuming stride, heading in to the bar to get ready for the show, I squealed and nudged my friend Laura. Butterflies – good grief.

After he walked by me, disappearing into the back along with the band, I laughed at myself and resumed what was most surely a mature and sophisticated conversation.

The crowd grew more comfy as they waited under the soft glow of the stage lights and red curtains. Most were seated in round tables of three or four with candles lit. Late-comers leaned on the wall or hovered near the bar with a fresh pour. A pug and a French bulldog meandered between chairs and tables and legs, looking for scraps and briefly entertaining affection from the clientele.

Do you remember when I came to visit you that time when you were living in Toronto? Nearly the first thing you said to me was “Do you know who lives down the street from me?” You were living a whole other life. I was still in school (didn’t that go on forever?).

The woman at the door greeted a slow, steady stream of happy folks who ditched their winter coats for a beer. A young couple walked in with a bright-eyed baby who settled peacefully into mom’s shoulder once she found a seat.

I remember you lived with me that summer, and we’d drive my parents’ Jeep with the top down, singing about your summer hat and smile. We drove to Guelph (sold out), we drove downtown from work (too late) – we must have tried Toronto too.

It has been ages since I cared about music the way I used to. I am easily distracted by bouncy songs that my kids can learn the words to; songs that make me feel young; songs that you forget in a week’s time.

But then he plugged in the wistful ‘Us Alone’ sign, and started to play. I breathed in, and my chest ached for his music and for all that time.

One day, Naomi, when we’re grown up – we’ll go see him together.